Developing of A Broad Range of BKG Melt Filtration Systems

Developing of A Broad Range of BKG Melt Filtration Systems

Nordson Corporation has developed these systems for plastics recycling

Many hydraulic piston-actuated screen changers are available, as well as manual systems. Also, Many BKG screen changers have a self-cleaning feature based on a hydraulically powered process called “backflushing,” which automatically removes contaminants while maintaining throughput and keeping flow and pressure constant. As an example, consider the HiCon™ V-Type 3G screen changer, which has four screen cavities. Melt flow from the extruder is split at the entry side and guided to the four cavities, two of which are located on each piston. Each pair of cavities is positioned so that they can filter their respective melt streams, until the piston removes one of the cavities from the process to remove contaminant buildup by means of backflushing.
The backflushing sequence starts automatically when the pressure differential caused by contaminant build-up increases to a pre-set level. For each cavity, a displacement piston retracts, creating a reservoir of filtered molten polymer. This material is hydraulically compressed and discharged in reverse direction, back through the screen,
carrying away contaminant for removal from the system. The sequence is performed for each cavity one after the other. In normal operation, polymer is flowing through all four cavities. While one of the cavities is changed,
the other three remain in the process.
A quite different method for automatically removing contaminant is that of the HiCon™ R-Type filtration system for recycling highly contaminated plastics. This fundamentally new system uses a cylindrical “separating head” with knives arranged on its surface in a helical pattern designed to move contaminant particles forward as the head rotates. Enclosing the head is a stationary filter element called a “strainer tube.”
When contaminated melt from an entry port flows into the cylindrical space between the rotating head and the strainer tube, the knives capture the contaminant while the contaminant-free melt moves through the strainer into flow channels that lead to an exit port. At the same time, the rotating head turns a screw which guides the contaminated material through cooling sections and finally to where it is discharged into collecting bins.
The HiCon R-Type filtration system cleans much more efficiently than commercially available systems for highly
contaminated polymers. The special design makes possible a uniform load on the strainer tube during the cleaning process, providing an extended lifetime for the filter and scrapers and increasing the overall efficiency of the system at far less melt loss.
For piston-actuated BKG systems, Nordson has developed different filter media that can be used with these systems. The robust multi-layer structure of new BKG screen packs prevents failures caused by the pressure differential—up to 200 bar— encountered during filtration. One such failure is “screen dimpling,” in which the mechanical stress forces screen layers into the holes of the breaker plate that supports the screen in the cavity. This distorts the screen, breaking the peripheral seal and causing contaminants to bypass the screen and become part of the end product.
Nordson precisely tailors the size of the screen pack to the dimensions of the cavity, eliminating the common problem of contaminant passing the screen pack at the edges. Nordson can supply the Nordson screen packs with various combinations of coarse- and fine-weave layers. The Nordson screen pack provides the optimum ratio of solid material and free volume, so that the polymer melt can use as many flow paths as possible to make its way through the filtration medium. This minimizes melt build-up and significant increases in pressure, which can lead to premature and costly screen changes and endangers the quality of the end product. For bottle-to-bottle PET recycling, PET fiber production and battery separator film production, Nordson has developed the BKG
FlexDisc™ for use in HiCon V-Type 3G, HiCon K-SWE-4K-75/RS and D-SWE screen changers. Each cavity contains a filter stack comprised of two to four FlexDiscs, depending on machine size. Each FlexDisc is equipped with two Nordson screen packs. As a result, there is two to 4.5 times more filtration area available for each cavity with the new FlexDisc than with conventional standard round screens, and 25% additional area (on average) when
compared to the former FlexDisc version.
Recyclers achieve finer filtration, higher throughputs, longer filter service life, and reduced specific backflush volume, all without need for a larger screen changer. 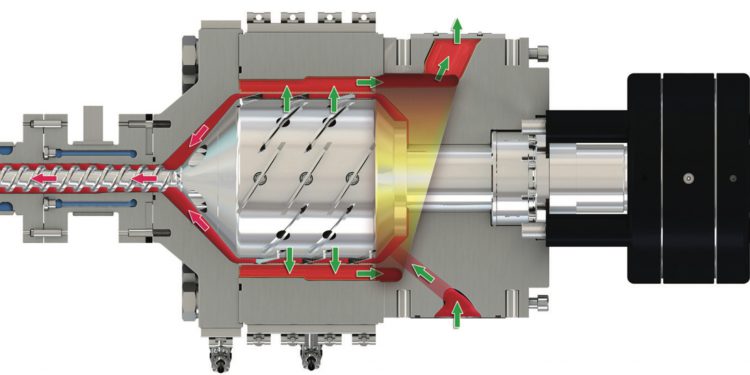