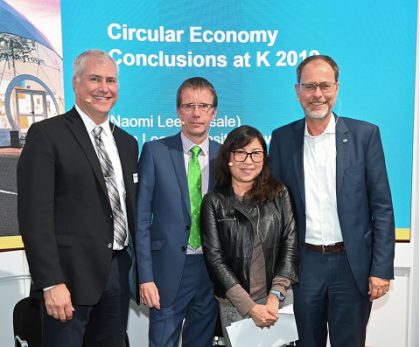 According to the latest press release published by VDMA: Journalists from leading national and international industry media drew a thoroughly positive balance on Wednesday in the VDMA Pavilion of K, the world’s leading plastics industry trade fair, with regard to the major theme of the fair: the circular economy.

“It has become clear that everyone in the plastics value chain sees it as their responsibility to do something about it”, said Dr Karlheinz Klotz (home image; 2nd right) from the magazine “Kunststoffe”. All the technological solutions that were shown for this purpose at K had been eagerly received by the public. However, one had also seen that the practical implementation of the idea of a circuit is difficult in many ways. The lack of standards, for example, makes precise material identification even more difficult, but this is very important for material processing. Klotz sees the K as the starting signal for all players in the plastics industry to intensively strive for solutions to establish a functioning circular economy.
For Naomi Lee of (Above image; front) “China Plastics & Rubber Journal”, it was evident at the show that all participants in the plastics chain had put the topic at the top of their research and development agenda. She was optimistic that the high relevance of the topic at this year’s K will not fizzle out without consequences. “After all I have seen, I now believe it is realistic to establish a circular economy for plastics around the world”, said Lee.
Sustainability has often played a role at K fairs. Recycling has also often been discussed. Don Loepp (Above image: Left) of “Plastics News” sees a remarkable difference at this year’s K: “This time, everyone has made a commitment to the subject. What is also new is that many brand owners have set themselves very ambitious goals”, said Loepp. He also saw a lot of technology at the fair that will help to achieve these goals, such as the recyclability of packaging. “No one is quite sure yet what the right way is, whether it is chemical recycling or bio-based plastics. But I have seen a lot of progress”, Loepp said.
“At the K, we were able recognise very clearly that Europe is the driver for development of a circular economy”, said Günter Kögel (Home image: 2nd left) of “K-Zeitung”. This is where the technologies are available and where social pressure is at its highest. This leads to the fact that willingness to change products is very high. “At the K, the interest and curiosity of the visitors were evident”, said Kögel. He therefore also expects the market to change noticeably after the trade fair and that more and more of the new technologies will be used for a circular economy.
For Markus Lüling (Home image: Left) of “K-Profi”, the K 2019 was a very good fair. The plastics industry had shown that it was still in a position to meet challenges. But the challenges have changed. So far, the main focus has always been on performance and efficiency. Discussions about the environment and sustainability have changed that. Now, for example, it is a matter of offering recyclable products and aligning materials accordingly. “The industry has accepted this challenge. It has shown that it has solutions. They could be seen at the trade fair. The companies met with a great response”, Lüling observed.
Chris Smith of “Applied Market Information” (AMI) also saw the circular economy and sustainability as the topics at K that attracted the most interest. This was obvious, he said, as plastic is currently under strong pressure from the public and also from governments. “This is an issue that the industry simply has to address effectively”, he said. Promising initiatives had been presented at K, for example on chemical recycling, in which billions were invested. “I think it is now dawning on everyone that they can no longer simply say that something is not working. Solutions will have to be delivered”, Smith said. These solutions must be sought at every level of the plastics industry.

“Our industry has realised that it has to do something to tackle the waste problem. Solutions were already on show at K that will actually make a difference”, Ulrich Reifenhäuser, President of K and Chairman of the VDMA
Plastics and Rubber Machinery Association, had previously said at the final press conference at the trade fair. This offer met with strong demand. “Visitors showed a high willingness to invest in building up capacities, but also a strong interest in new technologies with which we can eliminate waste problems”.
225,000 visitors came to K 2019. The next K will take place in Düsseldorf in October 2022.

VDMA asked visitors to the VDMA pavilion during the fair to express their wishes on the major subject of the circular economy. Here are some of the most frequently mentioned:
• The discussion about plastic waste should be conducted with more reason and a sense of reality.
• It is important to explain the value of raw materials already in schools.
• Talking is not enough, something must be done quickly.
• We must find a way to reconcile the business models of our industry with care of our planet.
• We must make even more efforts to expose false myths about plastics in society.
• More recycled or compostable material should be available as soon as possible.
• The consumer should generally accept recycled products.

The related article about “VDMA” published at PIMI News Channel was: The Joint Pre-K 2019 Press Conferences of VDMA and EUROMAP