Fakuma 2018: ENGEL Continues to Grow in DACH Countries and Asia

Fakuma 2018: ENGEL Continues to Grow in DACH Countries and Asia

by Editorial
in International, Machinery, News
0 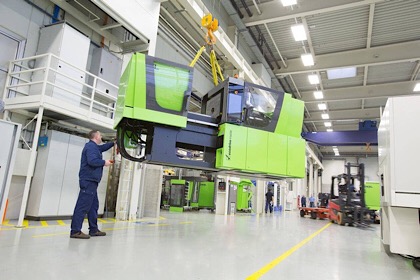 ENGEL AUSTRIA can present itself in good spirits at Fakuma 2018. The injection moulding machine manufacturer and system solutions provider is expected to experience further moderate growth for the current fiscal year, even despite the strong growth of recent years shifting to a sideways movement globally. Asia and German-speaking Europe (DACH) are the regions that are continuing to evolve in a positive direction. ENGEL has made further additions to its world-wide workforce during the current fiscal year.

Specifically, at the end of March 2019, ENGEL is expecting to close out the fiscal year 2018/2019 with a group turnover of around 1.6 billion euros, which would represent a 6% increase over the previous year. In the 2017/2018 fiscal year, ENGEL boosted its turnover world-wide by 11% to 1.51 billion euros. In the latest revenue breakdown, Europe represents the lion’s share with 53%, while America currently amounts to 24% and Asia to 22%. “The revenue growth in Asia is by far the biggest in the ENGEL Group,” reports Dr. Christoph Steger, CSO of ENGEL Holding, at Fakuma 2018. “And Asia is continuing to develop very dynamically.”

Germany remains key engine of innovation
On the other hand, the latest developments in North America are not as encouraging. Following several years of strong growth, the region is below last year’s level, as of the end of fiscal year 2018/19’s second quarter. The slowdown is primarily due to the large international conglomerates, which are taking a wait-and-see approach in the wake of the latest developments in economic policy. Smaller, local enterprises are still on an investment path.

The trade disputes are making it difficult to give forecasts, especially given that they could impinge upon European exports. Many international corporate groups have their headquarters in Europe, and procure machines and manufacturing solutions from there for their locations around the world. To date, there has been no sign of a downturn in European exports. Alongside Asia, ENGEL can report further growth in the German-speaking nations of Europe, also known as the DACH countries (“D” for Germany, “A” for Austria and “CH” for Switzerland). “We are currently above where we were one year ago in terms of incoming orders in the DACH region,” Steger explains.

Germany remains the market with the highest turnover and continues to be the key engine of innovation for ENGEL. ENGEL has managed to increase its sales in Germany by 50% over the past five years. Two factors in particular are contributing to this. Firstly, the global expansion of many companies based in Germany and secondly, the high level of technological development with heavily demanding projects.

Well-equipped for new requirements with strengthened teams
In addition to its turnover numbers, ENGEL is larger than ever before in its history in terms of its employee count. By the end of the current fiscal year, ENGEL will be employing 6,800 people around the globe, around half of which will be in Austria.

ENGEL is putting the continuing growth in its human resources to good use in response to its customers’ changing requirements. The trend towards digitalisation and ongoing advances in process integration and automation are increasingly making consulting services a necessity. In addition, networking and connectivity are leading to the creation of new business models, with which ENGEL will be able to provide even better support to processors during their routine production operations. Aside from sales, the teams have been strengthened worldwide, especially in the service area.

Simplicity: the success factor
In technological terms, ongoing improvement of the already very mature injection moulding process is a top-priority challenge, with ENGEL’s attention always focused on the systems’ user-friendliness. As process integration and manufacturing process automation accelerate, this increases production efficiency and quality, but also leads to more complex processes, which often runs counter to the desire for even greater efficiency and flexibility. ENGEL is taking on this challenge with its simplicity-based strategy. As a system solutions provider, ENGEL ensures that it is possible to simply and safely control even complex production processes without having to restrict the functional scope of individual machines and systems. This is precisely what will determine competitiveness and success, and even more so in the future than it does today.

Why Should Be “A Paid-Subscriber” and “Advertiser”
Keeping an independent media in countries that impose limitations on self supporting media, will help to support the humankind’s freedom. If you believe it, please act to be a PRO-MEMBER by clicking “HERE“, or:

Please send your PR’s directly to my email address to be published in the world via ” https://pimi.ir ” my address is: aasaatnia@live.com